This past May, Neuroscience students visited Toronto for the 2019 Canadian Association for Neuroscience meeting. Keep reading to learn more about one of the featured plenary talks given by Dr. Guo-Li Ming, Perelman Professor of Neuroscience at the University of Pennsylvania. 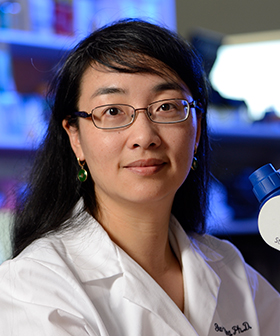 The 2019 Canadian Association for Neuroscience (CAN) meeting was held in Toronto from May 22nd to 25th. At this conference, one of the featured plenary talks was given by Dr. Guo-Li Ming. Dr. Ming discussed her work using human induced pluripotent stem cells (hiPSCs) to create human derived cerebral organoids, which her lab uses to model organogenesis, brain development, and disease. Cerebral organoids are 3D in vitro systems that self-assemble into organized structures resembling the human brain during development. A cerebral organoid can be created by putting hiPSCs in a miniature spinning bioreactor with either unguided methodologies to induce spontaneous differentiation, or guided methodologies to induce differentiation into specific structures such as the cortex and hippocampus.

A current limiting factor in organoid research is a lack of blood supply to cells within inner layers of the growing structure, causing the organoid to develop a necrotic core. This limits organoid development to a stage resembling the second trimester of human pregnancy. In her talk, Dr. Ming discussed methods that her research group is developing to help cerebral organoids receive nutrients closer to their core, promoting long-term growth and preventing necrosis. Using these methods, her group has shown that the organoids can develop for significantly longer than what has been previously attainable, and achieve cortical layer patterns that only occur during later stages of development.

Dr. Ming further discussed her use of cerebral organoids to investigate effects of the Zika virus. This virus is known to cause microcephaly in newborns, and organoids exposed to the Zika virus also develop to be significantly smaller than their healthy organoid counterparts. This similarity allows her group to work towards identifying potential molecular mechanisms of microcephaly following infection with Zika virus.

The development of brain organoids is an exciting new field that is quickly evolving. Brain organoids are an intermediate between cell culture and in vivo systems with unique potential to push forward neuroscience research. To learn more about cerebral organoids, please see the review published by Dr. Ming’s group below.